Knowing What it Takes to Succeed, Franchising Veteran is Bullish on Growth Potential of Industry-Changing Brand 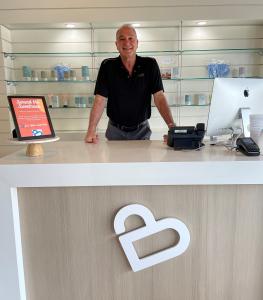 Jim Fitzsimmons is the Area Rep for the Carolinas for L.A. Bikini

My past experience in franchising along with my experience as CEO of startup companies has allowed me to be successful in awarding franchise units and then helping owners to successfully manage them,”

CHARLOTTE, NORTH CAROLINA, UNITED STATES, April 11, 2022 /EINPresswire.com/ — Jim Fitzsimmons – who knows a thing or two about franchising – doesn’t mince words when he talks about the potential of L.A. Bikini, the franchise concept that combines a novel “sugaring” hair removal technique with a forward-thinking business model. “For me, L.A. Bikini is an opportunity to get in early with an exciting brand that will redefine an industry,” Fitzsimmons said. “It’s sugar time”, he said with a grin.

Sugaring uses an all-natural sugar paste formulation to remove unwanted hair in a natural way without the harsh chemicals used in the outdated hot-wax Brazilian. Sugaring is a healthier, less painful way to remove hair that also inhibits hair growth, all of which helps to achieve the smoothest skin possible – and a loyal following.

The 70-year-old Fitzsimmons, who says with a smile that he’s an “old entrepreneur who refuses to retire,” joined L.A. Bikini in 2019. He owns two franchises in Charlotte as an Area Representative for North Carolina and South Carolina while also recruiting nationally to attract Area Representatives who commit to opening from ten to 20-plus units in designated territories over periods ranging from five to 10 years.

Prior to joining L.A. Bikini, Fitzsimmons spent 12 years as the North Carolina regional developer for Massage Envy – the nationwide wellness franchise providing massage, stretch, and skin care services – building the North Carolina region into the top region in the franchisor’s network with 45 units, seven of which Fitzsimmons still owns. “My past experience as an Area Representative for 15 years, combined with my five-plus years as a business consultant and 10-plus years as a CEO of startup companies has allowed me to be successful in selling franchise units and then helping owners to successfully manage them,” he said.

Not surprisingly, Fitzsimmons has found continued success in helping to grow L.A. Bikini. In a little more than two years he has awarded eight Area Representative agreements with a minimum of 64 units to be opened. Twelve of those franchise agreements – which include three of his own – are in North Carolina and South Carolina, part of a minimum commitment of 20 locations. “I hope to penetrate South Carolina’s major markets and also establish a presence in North Carolina’s Triad,” Fitzsimmons said.

L.A. Bikini is in a growth mode since it began franchising in 2015. It has 14 locations in seven states, but its ambitious growth plan calls for having 100 studios open across the country by 2027, eventually expanding to more than 300 locations.

While using sugar to remove unwanted body hair is actually an ancient technique, it took L.A. Bikini to find a niche with the unique service and help it stand out in a competitive industry with little differentiation. L.A. Bikini offers a forward-thinking business model combined with state-of-the-art technology; smaller, more efficient studio footprints that result in lower operating costs and fewer employees; and unique membership models that give customers special perks and savings with only a short-term commitment.

“The L.A. Bikini model has been designed to leverage the best aspects of a franchise model for its industry,” Fitzsimmons said. “For example, the membership model doesn’t result in unused pre-paid subscriptions and associated customer complaints – just a loyal following. Client files are all electronic, so service providers can check clients in and out with only one person at the front desk. And the footprint (1,600 sq. ft.) is modest, so overhead is low and the path to profitability faster. This streamlined model also allows for manager-led studios, which in turn, lends itself to multi-unit ownership.”

L.A. Bikini is striving to offer transformative hair removal by creating a mutually rewarding relationship between its owners, employees, and guests and that is a formula for success that has individuals like Fitzsimmons bullish on the growth of the concept.

“The increasing interest in people, young and old, who are looking to start their own business via franchising is very exciting,” Fitzsimmons said. “L.A. Bikini is well-positioned because we have very balanced agreements, unlike many franchisors who stack the deck against franchisees.”

Hoover, AL-based L.A. Bikini combines a unique sugaring hair removal technique that customers actually look forward to getting with an innovative business model that rewards customers with lifetime membership benefits without an ongoing contract. Franchising was launched in 2015 and L.A. Bikini expects to have 100 studios open by 2027, eventually growing to more than 300 locations nationwide.


EIN Presswire’s priority is source transparency. We do not allow opaque clients, and our editors try to be careful about weeding out false and misleading content.
As a user, if you see something we have missed, please do bring it to our attention. Your help is welcome. EIN Presswire, Everyone’s Internet News Presswire

,
tries to define some of the boundaries that are reasonable in today’s world. Please see our
Editorial Guidelines
for more information.

Jim Fitzsimmons is the Area Rep for the Carolinas for L.A. Bikini Sugaring as Opposed to Waxing is the Superior and Less Painful Hair Removal Process and That Means Big Business My past experience in franchising along with my experience as CEO of startup companies has allowed me to be successful in awarding franchise units […]

You can find out more about which cookies we are using or switch them off in settings.

This website uses cookies so that we can provide you with the best user experience possible. Cookie information is stored in your browser and performs functions such as recognising you when you return to our website and helping our team to understand which sections of the website you find most interesting and useful.

Strictly Necessary Cookie should be enabled at all times so that we can save your preferences for cookie settings.

If you disable this cookie, we will not be able to save your preferences. This means that every time you visit this website you will need to enable or disable cookies again.